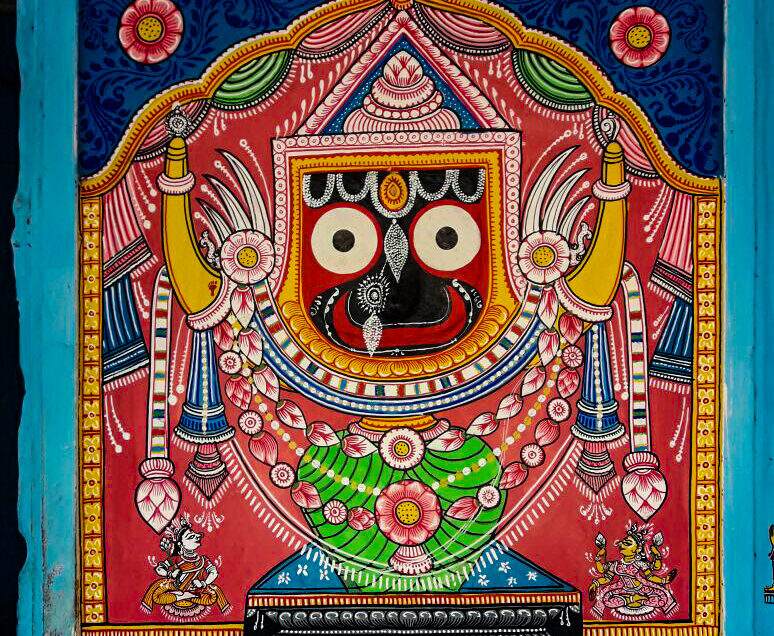 I am in Puri, in the eastern Indian state of Orissa, near the Hindu temple of Jagannath Temple, particularly important for Hindus; in fact, the temple is one of the four char dhams, that is, one of the four important pilgrimage destinations located in the four cardinal points of the Indian state that a Hindu must visit in life to obtain liberation from sins and eternal salvation. The other three temples of this tenor are Badrinath in the north, Rameshwaram in the south, Dwarka in the west. For completeness, it must be said that there is also another Char Dham which known as “Chota Chardham”, in the State of Uttarakhand and known as “Land of the Gods”.

But today it is the Jagannath temple that I want to tell you about. The temple is dedicated to Lord Jagannath, considered the god and supreme monarch of the state of Orissa, as well as an avatar of the god Visnu. The term avatar, from Sanskrit, means “descended” and it is the consistency that a Deva (god) or Devi (goddess) assumes when incarnating in a physical body to perform certain tasks. This term is mainly used to define the various incarnations of Vishnu, among which the best known are Krishna and Rama. The god Jagannath Temple of Puri is important because he represents all the deities of religious cults that fall within the realm of Hinduism. So is Shiva for a Saivite, Ganapati for a Ganapatya (devotee of the elephant-headed God Ganesh), Kalika for a Sakta (the one who worships Sakti as Shiva’s wife) and so on. For this reason, the temple of Puri is the place where the maximum integration between different religious currents, Vedic (closely linked to the teachings of the sacred Vedas texts that originate from the Arii, the people who in 2200 BC arrived in north-western India), puranic ( from the ancient sacred texts Purana), tantric (from sacred texts dating back to the 6th century AD, but with an earlier inspiration and rich in esoteric symbols), Vaisnava (from the God Vishnu), Janian, Buddhist and even that of the Aboriginal tribes, without any distinction of caste. Equality is also maintained with regard to the consumption of boiled rice-based foods that are offered daily. Think that every day the preparation of prasadam takes place, the sacred food served in the temple first to the gods and then to the faithful, and here the first mystery of the temple falls; in fact, although it is always the same quantity to be prepared, whether the faithful are 2000 or 20000, it never advances and is never insufficient. The cooking of the prasadam takes place by stacking 7 containers one on top of the other, which cook on the wood and the highest one is the first to carry out its cooking and then, in order, the one immediately below, until the last. And that’s one of the other unexplained temple facts.

It appears that the temple was built in the 12th century during the reign of King Anantavarman Chodaganga Deva (1077-1150), ruler of the Eastern Ganga dynasty who ruled the southern part of Kalinga, a historic area of ​​India in the eastern coastal region that today it includes part of the state of Odisha (Orissa) and part of the state of Andhra Pradesh. The temple, surrounded by 30 temples, is the greatest attraction of Puri; 65 meters high (one of the highest in India) is delimited by two walls, one external, the Meghanada Pracira and one internal, the Kurma Pracira. The current structure, the result of a series of manipulations overtime at the hands of the various government leaders who altered the original design, is a splendid example of Kalinga architecture, the ancient name of Orissa (Odisha).

For more than a millennium, every day, at the Jannagarh temple, a priest climbs to the top of the dome of the temple, as tall as a 45-storey building, to change the flag he always pulls in the opposite direction from that of the wind (!). If this ritual fails, the temple should be closed for the next 18 years.

On the gopuram (the temple tower typical of South India), at twenty meters high, the imposing Sudarshan Chakra is installed, built with techniques still unknown, so high and so large that it is visible from every corner of Puri; wherever you go, the symbol always looks straight at the viewer. Birds do not fly and do not fly over the temple and aircraft are also forbidden to do so. The same mystery of realization hangs over the main dome which at no time of the day, however the sun turns, does not cast any shadow. All facts are still unexplained.

Only Hindus can enter the temple, which however is visible from the top of Emar Matha, the building located near the temple’s eastern gate. Anyone who visits the temple says that when you pass the main door (Simhadwaram), you hear the sound of the ocean lapping that earth but, when you go back in the same direction from which you came, that sound is no longer heard. In addition, the sea breeze, which by day nature should reach land and the evening.