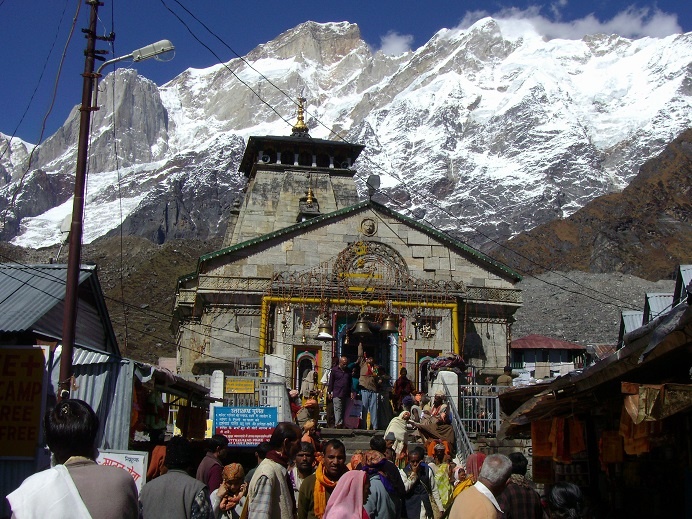 After the snow clears at the lower regions of the Himalayas in late April, Hindu travellers begin running to the four old temples known as Char Dham. Found high up in the Garhwal region of Uttarakhand, these temples are known to be the source for four blessed streams: the Yamuna (at Yamunotri), the Ganges (at Gangotri), the Mandakini (at Kedarnath), and the Alaknanda (at Badrinath). Hindus consider visiting the Char Dham to be propitious. It is believed that visiting these temples will wash away your sins and you will be free from the cycle of life and death. There are various alternatives for going on a Char Dham yatra (venture).

The Char Dham is open at specific seasons from late April or early May to November. Most people do this yatra in May and June which is considered to be the peak time. Due to heavy rainfall, from July to September in Uttarakhand region of India, people avoid going for this yatra. But still, you can find many pilgrims on the way if you plan in these months.

How to complete Char Dham Yatra

A Char Dham yatra isn’t simple. Travellers should be prepared in advance, as just two of the temples; Badrinath and Gangotri are available by vehicle. The other two; Yamunotri and Kedarnath are accessible through Trek. Out of all these temples, you have to do a longer trek to reach Kedarnath Temple. It takes around 10-12 days to visit all the temples. Alternatively, you can cover all the temples in just two days by a helicopter.

To help guarantee the wellbeing of travellers, they have to undergo a compulsory medical test by registering online. Regular weather updates can be received along the route using a telecommunication network.

Badrinath and Gangotri – are both accessible via road from Haridwar, Rishikesh, Kotdwar, and Dehradun.

Kedarnath – the trek begins from Gaurikund, 207 kilometres (130 miles) from Rishikesh.

Are there any Tour Packages?

Even though it’s not hard to make plans on your own for a Char Dham yatra, it’s preferred you should book them in advance from various operators to avoid any problems later.

Want to Go Your Own Way and Want More Information?

The temples are normally visited in a particular order starting from west to east. This implies you should see them in the accompanying request: Yamunotri, Gangotri, Kedarnath, Badrinath. Haridwar or Rishikesh is the beginning stage for transportation.

What is the Situation After the 2013 Flood At Kedarnath?

Significant fixes and construction works have been conveyed after the blaze flood in Uttarakhand, which caused large destruction and the death in the territory around Kedarnath Temple. The work is almost complete and incorporates new facilities and sanitation offices for pioneers. Likewise, the road from Kedarnath temple to Gaurikund has been re-established and a helipad is restored. A proper Alarm system has also been established to warn people about any disaster on the temple route.

Badrinath Dham is the popular temple among all other char Dham temples. The temple is committed to Lord Vishnu also known as Narayana and Hari and has Nilkantha Peak in the Backdrop.

When is Badrinath Temple Open?

On Basant Panchami, the temple priests choose an opening date in February, while the end date is settled on Dussehra. For the most part, the temple remains open for around 10 days after Diwali.

The most effective method to Visit Gangotri Temple

This place is believed to be the power source of the sacred Ganges River and therefore this place has a special place in the hearts of Hindu Pilgrims. Set in the midst of tough mountains and woods, Gangotri draws in just about 300,000 travellers every year. Each night towards 8 p.m., an aarti (adore with fire) is held at the temple.

When is Gangotri Temple Open?

Gangotri temple opens on a fixed day every year. This falls on Akshaya Tritiya (a favourable day in the Hindu schedule). The event includes a customary ceremony of the Goddess Ganga from her winter home at Mukhyamath Temple in Mukhba town, 20 kilometres (12 miles) downstream. After the temple is closed on Diwali, the goddess is returned to the Mukhyamath Temple

By what means Can Gangotri Temple be Reached?

Gangotri is most prevalently reached from Rishikesh (12 hours away) by means of Uttarkashi (six hours away). It’s conceivable to take transport or jeep to arrive.

Trekking to the Actual Source of the Ganges River

After doing a difficult trek, you can really go to where the Ganges River rises up out of a glacier above Gangotri. The genuine source is an ice cavern called Gaumukh (which means Cow’s Mouth), 18 kilometres (11 miles) up. Three days are required to finish the arrival trek, with around six hours of trekking a day. At Bhojbasa you can halt and stay at a Tourist bungalow from where Gaumukh is 6 hours away.

The Yamunotri Temple lies near the source of the sacred Yamuna River, the second holiest stream in India, This stream flows through Capital city of India; New Delhi and past the Taj Mahal in Agra. The temple is moderately lacking as it’s the least visited of the Char Dham. Notwithstanding, there is a sure enchantment to be experienced from the perfect mountain air, running water and picturesque magnificence. You can additionally enjoy the natural Hotsprings around the temple.

When is Yamunotri Temple Open?

Equivalent to Gangotri, Yamunotri opens each year on Akshaya Tritiya (a prosperous day in the Hindu schedule). It falls in the most recent seven day stretch of April or first seven days stretch of May. The temple likewise closes for the season on Diwali. When the temple doors are opened, the holy statue of the goddess Yamuna is brought into the temple from the nearby village Kharsali (also known as the home of Yamuna’s mother).

How to reach Yamunotri Temple?

By road, you can follow this route; Haridwar/Rishikesh-Dehradun-Mussoorie-Naugaon-Barkot-Hanuman Chatti. The excursion to the town of Hanuman Chatti, which is around 14 kilometres from the Yamunotri temple, takes around 8 hours from Rishikesh and 6 hours from Mussoorie Hill station. From Mussoorie, you can hire a shared taxi to Janki Chatti.

From Janki Chatti, you can reach Yamunotri Temple by doing a trek of 5 Kilometres via Kharasali. Thought the trek is not lengthy but you will encounter steep and narrow path on the way. It’s better to carry Trekking Pole of a Stick to help you out with trek. Alternatively, you can also hire Mules to carry you.

At Yamunotri, you can stay at night in Guesthouse there and take part in the evening aarti there.

Is it Possible to See the Actual Source of the Yamuna River?

The beginning of the Yamuna River is a solidified lake and icy mass situated around a kilometre over the temple. You are not advised to trek to the source if you don’t have mountaineering experience and proper gears.

The most far off and holiest of the Char Dham, in spite of the fact that Kedarnath temple demands more effort than any of the other temples to get to. Despite everything it still draws in excess of 100,000 travellers per year. This is on the grounds that it’s viewed as the seat of Lord Shiva and the most significant of the 12 Jyotirlingas in India. It is one of the most famous and magnificent temples as well erected on a glacial terrace leftover from a huge glacier melted long ago in Mandakini Valley.

When is Kedarnath Temple Open?

Priests of the Temple decide the opening date of the temple on the occasion of Mahashivratri late in February or early in March each year. The closing date for the temple is one day before Diwali festival.

In what manner Can Kedarnath Temple be Reached?

You have to start from Rishikesh and head towards Ukimath from there one road will lead you to Badrinath temple and another road via Gaurikund will lead you to Kedarnath Temple. Till GauriKund you can take a vehicle after that you have to trek 16 kilometres towards Kedarnath temple. Average time to complete this trek is 6 hours. Along the way flows Mandakini river. You can take a pony if you don’t want to walk. Porters are also available who can carry your luggage. Another way to access Kedarnath Temple is through Helicopter. If you want to book it you can visit Pawan Hans Helicopters Ltd. (Owned by the Indian government). One way trip using Helicopter can be completed within 15 minutes.